This is about the mathematical concepts of a "magma", a "loop" and a "monoid", which are descriptions of certain properties that the combining of things may enjoy.

One of the most basic notions of mathematics are sets with subsets and powersets. From these, one can define a binary relation between sets

to be a subset of

and then a map from

to be a binary relation between

which is left-total (each element of

is related to at least one element of

) and right-unique (aka "functional", each element of

is related to at most one element of

A binary operation by

. A binary operation of

on itself is called an inner binary operation on

with an inner binary operation

Examples of magmas: the natural numbers with addition

(but not the natural numbers with subtraction) and the set of words over an alphabet, with concatenation. The former is a special case of the latter if we encode numbers unary, i.e.

is the empty word,

) and every other number

is a word of length

s. The alphabet is

is essentialy the same as

Concatenation can be done in more than one dimension, i.e. we can consider not only words

) with concatenation ("horizontal composition"), but 2-dimensional words composed of letters

is an ordinary word, and each

has two magma structures (horizontal composition and vertical composition) and it can be interesting how they interact.

. The unary encoding of natural numbers discussed above is a magma isomorphism

is a binary operation

that is compatible with the magma operation

There are some elementary properties one can study for any magma

A magma with the property that equations of the form

are uniquely solvable is called a quasigroup. A loop is a quasigroup that posesses a neutral element.

are both equal to the identity map.

Groups can be defined as monoids in which every element is a unit, i.e. every

has an inverse element

. Groups can also be defined as associative loops.

A Loop is a quasigroup with a neutral element, but it needn't be associative or commutative. In a loop, every element has a left-inverse and a right-inverse, since

are uniquely solvable, but unlike a group, these one-sided inverses don't coincide in general.

, measures how non-associative the loop is (together with the right-associator).

, which is a weak form of associativity. The Moufang property implies that there exists a neutral element (so the quasigroup is a loop, after all): since

is uniquely solvable and

is uniquely solvable, we have

, which can be shown by the same method to be right-neutral, so we conclude with

that does not have the Moufang property.

Moufang's theorem states that the subloop generated by any two elements of a Moufang loop is an associative loop, i.e. a group. This theorem makes working with loops a lot more convenient.

An archetypical monoid is the set of endomorphisms of some thing, since composition of morphisms is required to be associative and there is the identity morphism. In other words, any monoid

can be seen as a category with one object

and vice versa. Observe that a group in this formalism is a category with one object such that all morphisms are invertible.

To every commutative monoid

one can associate an abelian group

such that the monoid homomorphisms into any other abelian group

are in bijection with the group homomorphisms

. This can be done by the construction familiar from building integers

out of natural numbers

and is called the Grothendieck group. Other prominent examples of this construction lie in the fundamentals of K-Theory.

The Eckmann-Hilton theorem states for a set

that have a neutral element

and distribute over each other, i.e.

, that the two operations actually coincide, their neutral elements coincide and that this operation is associative and commutative.

The classical application of the theorem is the case of the monoid of homotopy classes of loops of an H-space, which shows that, up to homotopy, composition of loops is the same as multiplication of loops. As a corollary, all higher homotopy groups

of a topological space

It is very nice to work out the Eckmann-Hilton argument as an exercise given a few hints: visualize the two operations as horizontal and vertical composition and look at expressions of the form 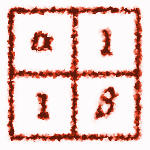