The units scientists use in their daily work are the SI units, and sometimes the equivalent cgs units. In these unit systems, everything is based upon the physical quantities length, mass, time (and some more). The part "physical" is only deserved if we mean something measurable by these "quantities". So, what does it mean to measure length, mass and time?

How do we measure time? We can compare with some known time-frame, like the duration of one full trip of the earth around the sun (also known as "year"), but only if we're ignoring that this duration changes over time. We can take a look at our watches; There, small Quartz crystals vibrate such that the frequency doesn't change over time, with high precision. To get higher precision, one can only take oscillating signals that are even more stable, like atomic clocks that use the frequency of (microwave) photons that are emmited in electron energy-level transitions. These are the best clocks we have on earth and this level of precision is not reached out of sheer scientific curiosity, but it's necessary for GPS to work.

What exactly does it mean to compare a time-frame with some frequency of an oscillation? In the easy example of a year, it means that we take a look at the position of the earth around the sun (for example, it could be summer solstice) when we start the measurement, and we observe how this position changes during measurement. When the measurement is done we integrate ("sum") over all the position changes and get the total length of the path the earth has travelled around the sun. This means that a unit of time is essentially specified by an oscillation in space. While this is not directly true for the atomic clocks, it is true indirectly for two reasons: we observe the electron energy-level transitions ultimately as oscillation of the position of something and every oscillation in space specifies just a scalar mutliple of the time frame specified by the microwave oscillation.

So, to measure time, we have to observe how things move over some distances, and our units of time are intimately linked to the distance used in the observation - it is impossible to give a precise definition of "a second" without reference to any distances, lengths or sizes if we want to be able to measure "a second".

How did we measure distances? By comparing them with known objects, where "known" means that we ultimately use one thing as reference for all the others, somewhat arbitrarily. A century ago, people used the "Ur-meter", a certain object of 1 meter length, for comparisons. Since then, molecules of the Ur-meter were displaced and the length changed measurably, so 1983 the definition of 1 meter was changed to "the length of the path traveled by light in vacuum during a time interval of 1/299,792,458 of a second". We can safely forget about the archaic factor 299,792,458 and observe that length is measured via time now. Didn't we observe before that time is measured via length?

The definition of length units in terms of time the light takes has the advantage that light is the same everywhere and available in abundance, so we can compare measurements without having to move or make copies of any other reference object. The same is proposed for the kilogramm - it can be defined via the energy of a photon (by Einstein's famous formula).

Measuring time can be a very complicated issue, since we don't want to measure the time at one place, but usually at multiple places, to compare them. For example, our artificial satellites measure their position by measuring how long the light takes to go between a point on the earth and the satellite. For this, they need to have a clock on board. From the change of their position, they can calculate their speed. This is where things become interesting, since a change of speed alters the perception of time (general relativity). Taking general relativity into account, one can use insights from quantum physics to build high-precision atomic clocks and computers and launch them into space, which gives us GPS.

What do we mean by "observe the frequency of a photon"? In the end, it means we build a complicated apparatus that transfers information in the form of (other) photons to us, maybe via a computer screen that displays a number. To build that apparatus, we need some model of the reality, some units of length, time and mass. This means that the measurement is always bound by the theory that is used to make the measurement.

By the way: this article of Terence Tao about dimensional analysis inspired me to finish this article now, and I can only recommend it! While we're at it: you should also take a look at Longitude, a book about the importance of time measurement for sea navigation and a true story how we got the first usable clocks. 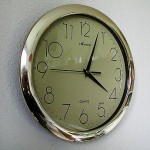