Mindmap on complex analysis in one variable

Here is my mind-map for first-course complex analysis. It contains some well-known theorems and "arrows" between them.

Here it is, and of course you can download it as a PDF or as a SVG (vector graphics) as well (click on the image to enlarge it): 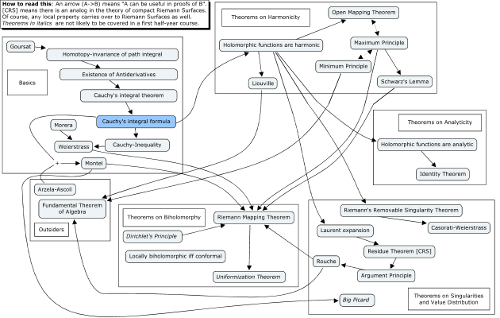 The license is CC-BY-NC-SA (if you redistribute, put my name on it, don't make profit, share alike).

There are some aspects which require an explanation:

An arrow (A --> B) roughly means "you could try to prove B by using A and maybe something else, although A might not be necessary to prove B". I tried to remove redundant arrows, so keep in mind you can prove most of the theorems from the Cauchy-Riemann differential equations and some calculus ...

Another hint on the interpretation of my mind-map:
"existence of anti-derivatives" in the context of the mind-map really means "holomorphic functions have anti-derivatives on every simply connected domain", and "homotopy-invariance of path integral" really means "the path integral over holomorphic functions is homotopy-invariant on every simply connected domain". While you can do complex analysis without homotopy theory (even without homology theory), I don't like that approach very much. At least by using homology, some statement are easier to state. With homotopy, they become easier to prove (assuming you are allowed to use algebraic topology).

I created the mind-map (on the occasion of my oral exams) to keep it as a reminder and to sort out which statements could be generalized to harmonic maps or even to analytic maps (that was fun!).

It's a nice exercise to try to prove these on your own.