Writing from my very last day at the ICTP in Miramare (Trieste), Italy, I thought it's time to summarise some impressions, as promised. First, some remarks on the ICTP and sightseeing around Miramare (which might be useful to future visitors), then I will comment on the Summer School and finally the Conference on Hodge Theory and Related Topics.

Sightseeing around Miramare, Trieste and Venice

The summer school took two and a half week, where the first week was devoted to (recall?) very basic material: the first lectures defined manifolds and varieties and rushed over to de Rham cohomology, Kähler forms, sheaves, schemes and by the end of the first week the lectures about variations of Hodge structures and mixed Hodge structures reached the limit of what I knew already before (since I used my train ride to skim through Voisin's book).
Now seems to be a good time to thank Andreas Höring for having teached classical geometry of Kähler manifolds in Paris so well.
Since the lectures of Migliorini and de Cataldo on the Hodge theory of maps assumed knowledge of Abelian categories and spectral sequences, I still don't understand why the summer school started with these basic courses. I can not imagine that anyone who understood any of the lectures in the second week, could have possibly needed to learn what a manifold or a variety is. Maybe there are some hidden motives behind this, I haven't asked the organisers.
The organisation was very good, all course material was printed out in sufficient quantity, the lectures didn't take more time than expected, there was coffee & cookies in sufficient quantity twice a day and the overall working and learning atmosphere was fine. I missed problem sessions a little bit, but the intended problem sessions might have just turned out to be example sessions instead because of people requesting this. I was impressed that the organisers found a quick replacement for Claire Voisin, who couldn't come to Trieste. The replacement talks given by C. Schnell, F. Charles and M. Kerr were very good and understandable.
For the participants I recommend having a look at Charles Siegel's blog and website for lecture notes he has taken. Again, Charles Siegel took notes for some of the conference talks, see here and here.

I would be happy to go to the ICTP again in this life. Also, Hodge theory seems to be nice (at least parts of it).

small remark: I heard some rumour about a conference last year where they decided about the pronounciation of "Hartshorne". Clearly, the person is called Harts-horne, as several Australian mathematicians told me, but now the books name was decided to be Hart-shorne. Hilarious! 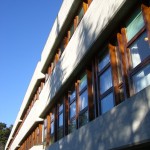