Project idea: What if every kid would learn to code?

This is an idea for a short story.

Imagine every kid (in your country, or in the world) would learn coding, maybe first at very young age through wooden playtoys and graphical programming languages (such as Primo), then later on "real" languages like Java, Python, Haskell and so on, together with a good bunch of algorithms and datastructures.

What would be the effect of this at the beginning, after 10 years when these kids finish school, after some more decades when they have kids themselves who learn to code in school?

Since I heard Guy Steele's inspiring talk Growing a Language (which might have inspired the up-goer-five idea) I couldn't stop thinking about this, and I think it will happen in future (although in a very distant future, as it seems). Quoting from the talk:

It may be that a hundred years from now there will be a programming language that by then has stood the test of time, needs no more changes for most uses, and is used by all persons who write programs because each child learns it in school.

I'm less interested in pushing to get more kids into coding, just because that is a different topic and I prefer to ponder this fantasy without any agenda. That said, I think we would benefit as a society, if all kids would learn a bit of coding (not just programming languages, but actual coding) in school, just as we used to learn other practical things!

You can leave a response. 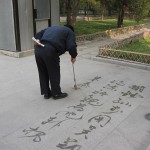