An arrow notation for annotations

Nowadays it is common to use

to denote that an element

is mapped to an element

. In particular, the arrow

(in LaTeX: \rightarrow) denotes a map, or more generally a morphism, while

Have you ever seen an arrow which has a triangle as head? Like those: it doesn't happen very often, and the reason is that it's not part of the standard LaTeX language, you need to include extra packages.

This seems unfortunate, but it can be a useful fact. Since this kind of arrow doesn't appear often in mathematical articles when printed out, it has most likely no mathematical meaning assigned to it. This means you can use this arrow for annotation on the blackboard! It happens from time to time that I get annoyed by someone drawing minus signs instead of bullet points to enumerate equations, which contain signs themselves. Equally annoying is a blackboard full of commutative diagrams, where some of the arrows are not arrows in some category but just annotations, like here: Non-filled triangle heads are slightly too similar to standard arrows. I want you to use only arrows with filled triangles at the head for annotation. Thank you so much! 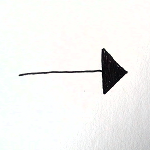