What is a flat module? How should I think of it?

To answer that question, I will provide some background, then define what a flat module is, clarify the definition by means of example and counter-example and finally show some nice and useful properties which you can memorize later by doing exercises. If you're lost, take a look at the references below.

Flat modules are the "local" model for flat morphisms of schemes. Flatness is an essential part of the definition of étale morphisms. Etale morphisms are used in the definition of étale cohomology, which was used by Deligne 1974 to prove an analogue of the Riemann hypothesis over finite fields. The proof of the Riemann hypothesis over finite fields finished the proof of the Weil conjectures, some of the most influential conjectures in algebraic geometry.

You think you already know flat modules are? Then look if you can do all the exercises!

I have to admit that this whole blog-post is more an experiment for me than an article for you. I tried to explain flat modules in an intuitive-but-accurate manner to someone who doesn't know what modules or tensor products are, assuming just the definition of a ring. I tried to convey something interesting about flat modules to those who already know tensor products but never managed to take a look at flat modules. Here and there I used the scary word "functor" but I think the text degrades gracefully. Like in Wikipedia, this text is written for a very mixed audience, just one with a higher mean value estimate of math knowledge than in Wikipedia. If I find some time, an article about the geometric side in scheme theory, discussing flat and étale morphisms, will follow.

You have to know what a (unitary) ring and an abelian group are. You may have heard about modules, tensor products and exact sequences, too. To refresh you knowledge a little bit (or to explain it to you in the first place), let me describe modules, tensor products and short exact sequences here. If you know this good enough, skip directly to the definition of flat modules.

An R-module is an abelian group M on which the ring R acts, which just means that there is a group homomorphism R×M → M which tells you how to multiply the ring elements with the group elements. This group homomorphism, let's call it φ, is required to satisfy φ(rr',m) = φ(r,φ(r',m)). It is very important to distinguish different modules which have the same underlying group but different homomorphisms for the ring element multiplication. To be precise, what I have defined is a left R-module, and if the homomorphism would've been of the kind M×R → M, satisfying φ(m,rr') = φ(φ(m,r),r'), it would've been a right module. Since everybody gets tired of writing many greek letters, it is convenient to write r.m instead of φ(r,m) (for r∈R and m∈M, a left R-module). A good class of examples for modules are ideals of a ring. Make sure you understood the difference between left- and right-modules.

An R-module homomorphism is just a group homomorphism that "commutes" with the multiplication of elements from R. So if ψ : M → N wants to be a left-R-module morphism, then M and N have to be left R-modules and ψ(r.m)=r.ψ(m) is required to hold.

Now there is the notion of a tensor product ⊗ of two modules, where you take a left R-module N and a right R-module M (for some commutative unitary ring R, of course) and form the group M⊗N, or with an even better notation:

Some people prefer a more direct approach to tensor products. To prove that tensor products actually exist, you can define them by a quotient of the freely generated abelian group over M×N:

and then prove that there is a unique group homomorphism like in the definition above...

It is very important that the tensor product is not, as a set, just the collection of items of the type m⊗n but also of their formal linear combinations!

the first from N to M is injective (a monomorphism), the second one from M to P is surjective (an epimorphism) and the image of the first one equals the kernel of the second one (exactness at M).

To prove right-exactitude of ⊗ M is a good exercise.

Let's take Z, the integers, as our base ring R. The first module to look at is ... Z, where we let Z act on itself via multiplication. The same works for any quotient of Z. Look at this short exact sequence of right-Z-modules:

where the first map is multiplication by 2 and the second map is projection onto the quotient by the ideal that is generated by 2.

Now we're tensoring this sequence with the left-Z-module Z:

Now you should know that for every ring R which is taken as a right-R-module over itself, the tensor product does nothing: for any left-R-module M the abelian group R⊗M is isomorphic to M again, where the isomorphism is explicitly given by multiplication, the inverse being the homomorphism which sends m to 1⊗m, where 1 is used to denote the unit element of the ring R. In the same fashion, N⊗R is isomorphic to N for every right-R-module N.

but let's pay attention to the homomorphisms!
We need to show that the first homomorphism in this new sequence is injective. It is, by definition, given by composition of these morphisms:

where I have written

the homomorphism induced by

via the tensor product. Looking carefully at the definition of

, we conclude that this new homomorphism is nothing but the good old multiplication by 2. So this is injective and thus the sequence exact. Have we proved that Z is a flat left Z-module? No, for this we have to look at all short exact sequences, not just particular ones.

The arguments used here can be used to prove the more general statement, that every ring, thought of as a left module over itself, is flat. This is another good exercise.

Now let's take the same sequence as above

but tensor it with

.
This leads to the sequence

which can be simplified to the sequence

by looking at the first homomorphism the same way as before, we see that it is a composition of three homomorphisms:

and this composition turns out to be ... 0! At the end we multiply elements of

with multiples of 2, so the image contains nothing but 0. Since

does contain slightly more, the homomorphism is not injective. This proves that

is not a flat left-Z-module (in other words: it's not flat over Z).

We will occasionally talk about localisation here. If you don't know that concept yet, just skip those parts. On the other hand, if you want to understand flat morphisms in geometry, you need to learn how localisation works and it doesn't hurt to learn it now.

Take a look at these sources if you're lost with my writing or if you want to know more.

If you need any hints to these exercises, leave a comment. 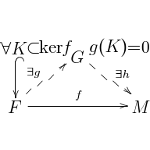