How to manage personal notes?

Recently I've been looking (again) for some note-taking system that satisfies me. Searching across the blogs, I decided to share my experience with information-management tools with you.

Once upon a time, we used books made of paper and a pencil. Sadly, this solution provides no search and therefore everything older than a few days is either lost or at least expensive (in time) to get back. So, this doesn't work for me. This is sad because I always think of pen&paper as the perfect tool-set to put thoughts from the mind into the outside world (well, personal communication is even better, of course). So I do use pen&paper a lot, but when it comes to taking notes I might want to re-use a few days later (or even month and years later), I have to stick to my computer.

A few years ago, I used to have an Apache webserver and the MoinMoin Wiki installed on my computer. Back then, wikis (those systems like Wikipedia, where you can easily edit everything and create links in-between the pages/notes) were not supposed to be used for personal knowledge management, but it was possible. I don't remember exactly when I decided to abandon the wiki, but I remember why: it wasn't portable and I had put too much data in there that I needed to have without my home computer, too. So I moved the data to other services and in the end, stopped using the wiki. Then, there was a vacuum. I used Google Documents, text files on my hard-disk, emails to myself and some strange not-really-working note-taking apps on my mobile phone. What a mess! Now I discovered Tomboy - a beautiful little personal wiki, which you can use even without knowing anything about wikis. It has almost no features: You can create notes, create links between notes and once you type some text which is the title of a note, it becomes a link. Well, there are some formatting options (titles, lists, captions, etc.) but I use only bulleted lists. You don't have to know any wiki-syntax (and if you don't know what "wiki-syntax" means: good, you can just forget about that word). Tomboy is written on the Mono platform (an open .NET equivalent), which means that it works under Windows, Linux and Mac OSX - isn't this great? You can use the same system at work (probably on Windows) as at home (probably OSX or Linux).

In Ubuntu Linux recently they developed a new remote storage possibility which goes under the name "Ubuntu One". It is possible to sync your Tomboy notes with it, so you can keep various different computers in sync - in theory. There is still a little bug which messes up all bulleted lists, so I recommend to use this synchronisation with care for now. Maybe in a few months it will be stable (they said it's a problem with some XSLT that they're already investigating).

There is a software project to bring Tomboy notices to Android smartphones, too: Tomdroid. For now, Tomdroid needs you to actively sync your notes, either by copying some folder manually or by using a trick and the adb (Android Debug Bridge) over cable. However, the Tomboy team is working on their REST API for Tomboy synchronisation with various services (such as Ubuntu One and Snowy), so Tomdroid will be able to sync some day (this year, maybe!). In Ubuntu, you just type "sudo apt-get install tomboy" in the console to get it (have I mentioned that it's open source?). For Windows, Mac OSX and developer versions, look at their download page. If it lacks some feature you need - there are plug-ins! I use the CamelCase-plugin that turns every word with to capital letters into a link (like back in the old days of WikiWikiWeb) and the LaTeX-plugin which enables you do put math formulae into you notes (great for mathematicians and computer scientists).

The power of Tomboy comes from it's simplicity. You should give it a try. 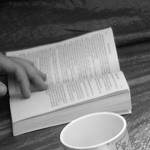